The Portland Timbers Outlasted the Columbus Crew as a Timbers Army crowd of 4K Traveled Across the Country to watch their Timbers beat Columbus 2-1 in the 20th MLS Cup Final at the Columbus Crew Stadium.  The atmosphere was electric – mainly due to the Portland Crowd behind the goal – but everyone stood the entire game despite the home team giving up 2 goals in the first 10 minutes of the ballgame.  Tyler and I had a blast – watching my Timbers pull off the improbable win – Portland’s first Championship in over 40 years as an organization.  Watch as they arrive home to Portland.   I do have to say however the organization of the Cup by MLS was spotty at best.  Tshirts, hats, scarves were impossible to come by and only available in the stadium after waiting for hours and they sold out of everything a full hour BEFORE gametime. The Exclusion of Timber Joey – the log cutting Timber man – after Portland had the log and huge chainsaw trucked across the country was an opportunity loss by ESPN, MLS and anyone who knows anything about Soccer in the US. It would be like saying the Dallas Cowboys cheerleaders can’t come to the SuperBowl. (the decision by Columbus to disallow the chainsaw wielding Joey and MLS/ESPN not stepping in to overrule was an opportunity loss by the league and show’s just how STUPID the big brass and decision makers at MLS are!!  It was all ok in the 80th minute however when I got to sing You Are My Sunshine (in honor of former Timber Jim’s- daughter who died ).

So its matchday 6 of Champions League with lots of different scenarios that can see teams thru this Tues/Wednesday.  The English teams with their backs to wall as Man United, Chelsea and Arsenal all need wins for a chance to advance to the knockout round of 16.  The Gunners need a 2 goal victory on the road at Greek Champ Olympiacos in fact, while Chelsea just needs a draw to advance.  (see the entire breakdown below) 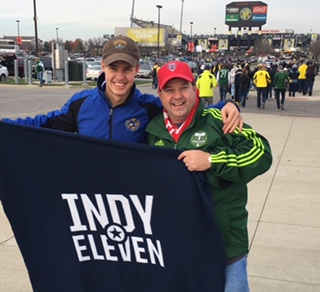 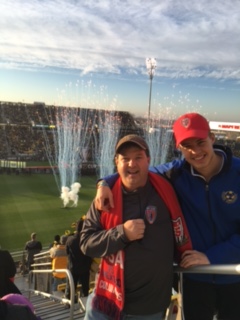 Who will Make it Thru – Video

How Teams Can Qualify from Matchday 6

Roma hopes that Victory won’t be Necessary vs Bate

Champions League: How teams can qualify from each group

Shakhtar Donetsk: Will qualify for the Europa League if they at least match Malmo’s result. They go to PSG on the final matchday.

Malmo: Must better Shakhtar’s result to qualify for the Europa League. They are away to Real Madrid.

Wolfsburg: Need a point at home to Manchester United to qualify. Will also go through with a loss against United if PSV fail to beat CSKA.

PSV Eindhoven: Guaranteed to progress if they win at home to CSKA Moscow, at the expense of either Wolfsburg or Man United. They can also go through with a draw on head to head if Man United lose to Wolfsburg,

CSKA Moscow: Will qualify for the Europa League on head to head if they beat PSV.

Benfica: Have qualified, and will finish top of the group if they at least draw at home to Atletico Madrid.

Atletico Madrid: Have qualified, and will finish top of the group if they win at Benfica.

Galatasaray: Need a draw at home to Astana to qualify for the Europa League.

Astana: Must win at Galatasaray to qualify for the Europa League.

Juventus: Have qualified and need a point at Sevilla to top the group.

Manchester City: Have qualified and must win at home to Borussia Monchengladbach and hope Juve lose to top the group.

Borussia Monchengladbach: Must win at Man City to be guaranteed a place in the Europa League.

Sevilla: Must win at home to Juventus and hope Gladbach fail to beat Man City to qualify for the Europa League. If Sevilla and Gladbach finish level on points, then Sevilla hold the head to head.

AS Roma: Will qualify with a win at home to BATE as they hold the head to head over Bayer Leverkusen. A draw will also be enough if Leverkusen fail to win.

BATE Borisov: Must win at Roma and hope Leverkusen fail to beat Barcelona.

Olympiakos: Need a point at home to Arsenal to qualify. A defeat of 1-0 or 2-1 would also see them finish ahead of the Gunners on head to head away goals.

Arsenal: Must win at Olympiakos. Arsenal would need to win by two goals, or a one-goal victory margin of 4-3 or higher, to climb above the Greek club on head to head points. If Arsenal were to win 3-2, then head to head would be level and it would go down to overall group goal difference — which is guaranteed to send the Gunners through.

Arsenal will need to:
– Beat Olympiakos by two or more goals
– Or by a one-goal margin of 3-2 or higher

Dinamo Zagreb: Have been eliminated from the competition completely.

Each team has quite a simple task, although the explanation is quite complicated. We’ll go in reverse for this group as Dynamo Kiev are key here to there being three teams level on points.

What is important to note is that if more than two teams are level on points there is no consideration given to 1 vs. 1 results. A head to head mini-league is created using only the results involving those three sides. And as Maccabi would have lost all their games, the group will come down purely to goal difference in games involving Dynamo Kiev, Chelsea and Porto.

– Chelsea need a draw to qualify
– Porto must win at Chelsea to definitely qualify, a draw is not enough if Dynamo win
– Dynamo are guaranteed to qualify by beating Maccabi

Dynamo Kiev: Victory at home to Maccabi Tel-Aviv will guarantee their qualification, which will be as group winners if there is no winner in Chelsea vs. Porto. The two-goal win over Porto has been key. With all three teams on 11 points, Dynamo have a goal difference of +1.

Chelsea: Only need a point at home to Porto, and will also qualify if Dynamo fail to beat Maccabi. With all three teams on 11 points, Chelsea have a goal difference of 0.

Porto: Must win at Chelsea, or hope Dynamo fail to beat Maccabi. No other result will do. With all three teams on 11 points, Porto have a goal difference of -1.

Gent: A victory at home to Zenit will guarantee their place. They would also be guaranteed to qualify if Valenica fail to beat Lyon, as they hold the head to head over Valencia on away goals.

Valencia: Must win at home to Lyon and hope Gent fail to beat Zenit.

Lyon: Have been eliminated from the competition completely.

This site uses Akismet to reduce spam. Learn how your comment data is processed.